This ain't your Grandma's brunch but she'd probably LOVE it! 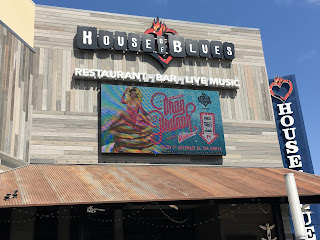 Move over divas! There's a new Drag Queen Brunch in town! Happening on the first Saturday of every month at the new location of the House of Blues in Anaheim! 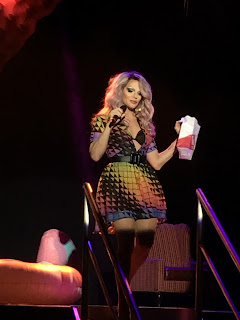 I've been to other drag queen shows and don't get me wrong, they're always fun BUT this was a WHOLE 'nother level of drag queens folks! The first thing you'll notice is the FABULOUS (no other word will apply) host of the show Wiliam - a well known drag queen with a huge following and personality to match! She runs the show and well, it shows! She does a great job of keeping everyone laughing and engaged, while keeping the show running like a well lubed...er oiled machine. 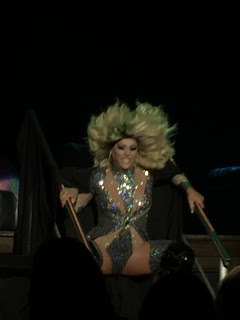 Equally fantastic are the drag queens themselves! The majority of these lovely ladies are from RuPaul's Drag Queen Race and it shows in the level of professionalism and magic they exude- from the costumes to the dancing. This is basically your crème de la crème ladies in drag! Not to mention, they are hilarious and the whole show in general will have you in stitches the entire time you're trying to eat your chicken and waffles! 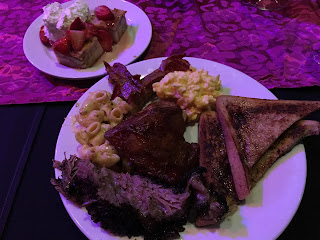 Which leads me to the food -- cuz this is technically a 'brunch' right? ;) The food is a fabulous buffet brunch style of southern fare including the aforementioned chicken and waffles, a carving station, an omelet station and a long food line of down home comfort food like biscuits and gravy, mac n cheese, jambalaya and of course, your typical breakfast fare like scrambled eggs and sausage, bacon, etc. You pretty much won't be wanting for much with this spread!

If you're looking for something different from the same ole boring brunch with mimosas (and yes, they offer those!) then this is what you've been searching for my friends! I highly recommend you grab your besties, throw on a feather boa (or not) and head over to the new House of Blues in Anaheim on the next first Saturday of the month. You won't be disappointed - William won't let it happen! ;) 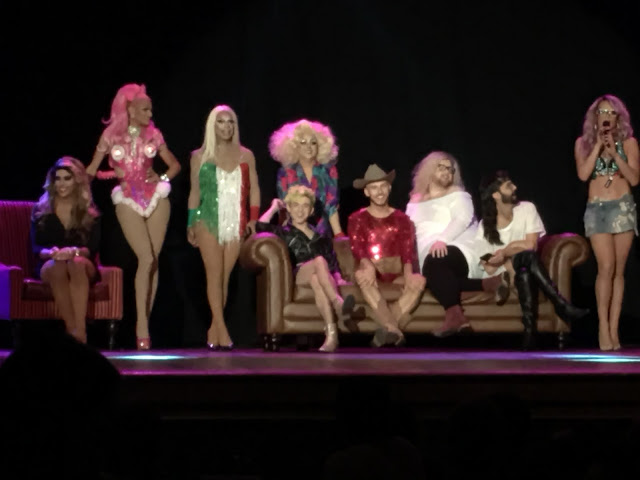 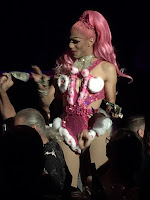 HOT TIP: The ladies do accept tips while dancing in the audience so be sure to bring some $1 bills in case you want a little extra attention! They also are available for pictures afterwards - for a $5 fee, but isn's that worth blowing up your instagram? ;)

House of Blues Anaheim's World Famous Drag Queen Brunch is offered every first Saturday of the month at 11a.m. Ages 18+ only.

About House of Blues Anaheim:
The new House of Blues Anaheim at GardenWalk, marks the first new House of Blues to be built in the U.S. in a decade. The venue spans 44,000 square feet of space, with live music in four unique entertainment venues all under one roof including the main concert hall, the intimate Parish, the Foundation Room and House of Blues Restaurant and Bar. All four of the entertainment and food spaces offer the most advanced sound system of any House of Blues, and the location will feature live entertainment every night.Their new location is at the Anaheim Garden Walk, 400 W. Disney Way, Suite 337 in Anaheim - you can't miss 'em!
About House of Blues:Founded in 1992, House of Blues are located throughout the United States and form the country’s pre-eminent group of intimate music venues. Each features state-of-the-art sound and lighting technology in one-of-a-kind custom designed environments aimed to bring fans as close as possible to the artists. Every location’s restaurant and bar is adorned with signature original folk-art – part of the world’s largest collection – combined with the House of Blues legendary hospitality and tantalizing cuisine.

Posted by OCFoodieGirl at 9:41 PM