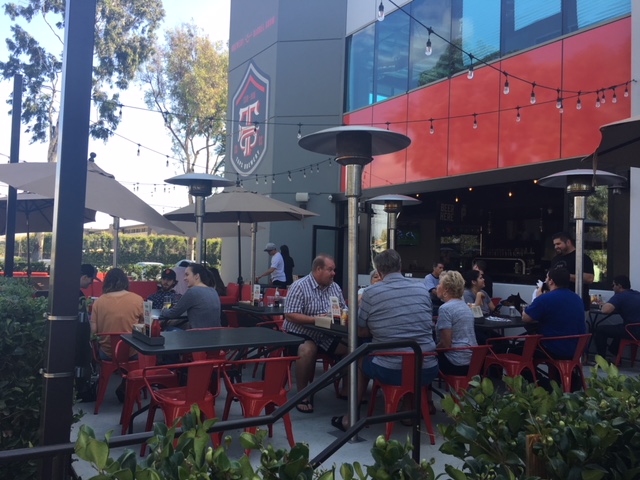 You're probably been to Taps Fish House and Brewery, the successful restaurant and brewhouse that started with its popular Brea location. Known for great food and just as much for its award wining craft brews, Taps newly opened 19,000 square foot Brewery and Barrel Room consolidates their full scale production while offering the public a new place in the OC to enjoy a beer and a bite! 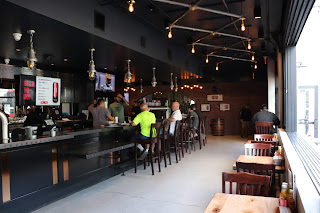 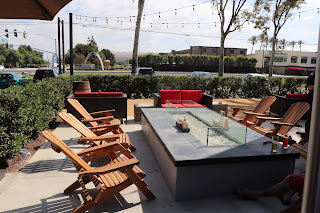 Seriously something for everyone here and yes, it's pet-friendly as well as family-friendly. Built in an area surrounded by business complexes its really the perfect place to meet a friend after work or spend a lazy Sunday afternoon!

What, you ask, is Taps "street food"?! Basically, it's 'beer-centered' bites that go with a nice cold glass of beer! While visiting recently I was able to try the following items: 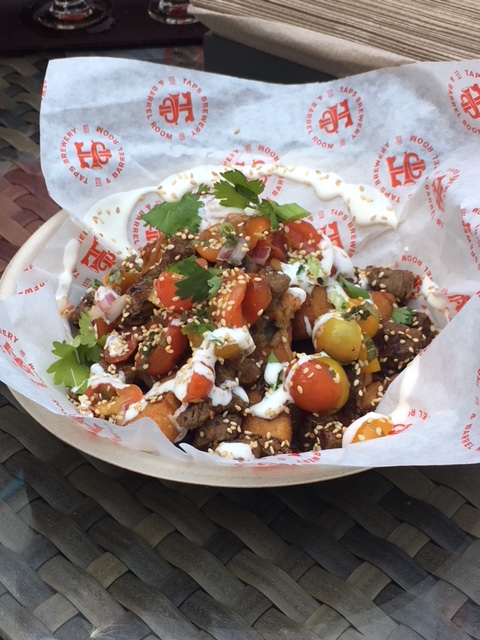 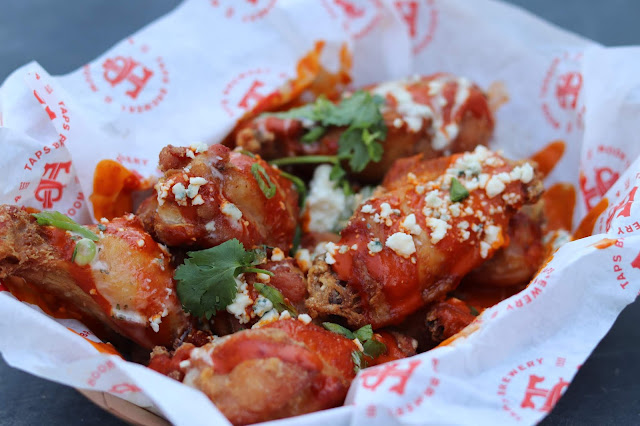 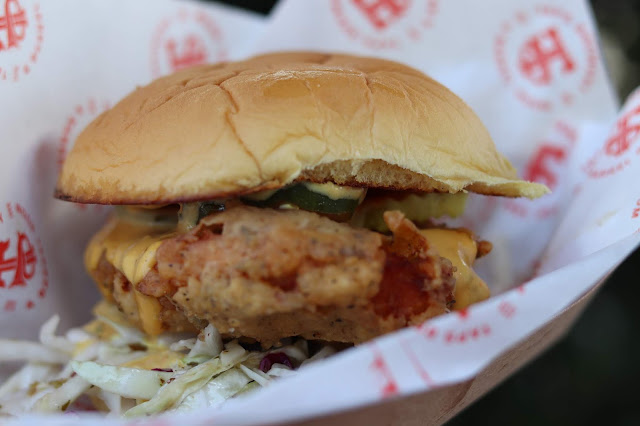 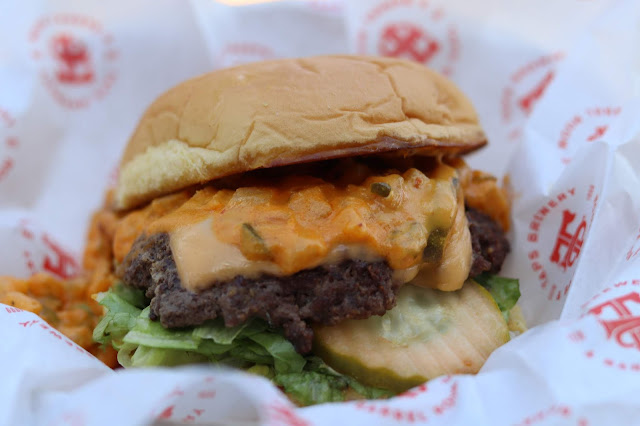 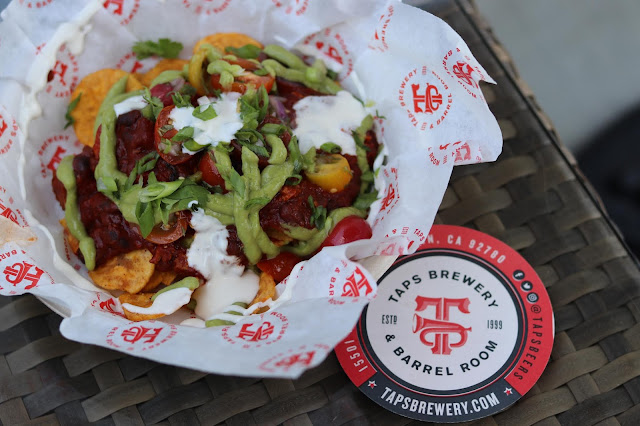 While everything was tasty, the standouts for me were 1) the Colonel Roman's Fried Chicken Sandwich which was cooked perfectly crispy on the outside yet juicy on the inside. I also couldn't get enough of the vinegar slaw that was slathered on top of the chicken. A MUST try when you visit;  and 2) the Impossible Vegan Nachos - now, I'm about as far away as you can get from being vegan and admittedly I didn't expect these to be so spectacular but I gotta call a spade a spade when I see one! Topped with chili made from the impossible burger patties and drowning in the most delicious avocado coconut cream sauce - these were vegan heaven on a plate! 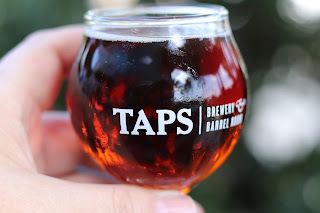 Now, admittedly I'm not a huge beer drinker but I couldn't come to the new Brewery and not try the beers, right? I actually sampled several of the beers including the American Cream, the Irish Red, the Barrel Aged Boppledock, and the seasonal Pumpkin Ale.

My hands-down favorite was the Pumpkin ale which I HIGHLY recommend you try before it goes *poof*!  I also I really enjoyed both the American Cream and the Barrel Aged
Boppledock and would order these again on future visits.

If beer isn't your thing have NO fear for they also have a variety of other drinks including cider, red and white wine and even a few soju cocktails! Definitely worth a visit no matter what your drink of choice is! 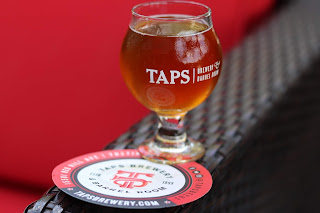 Be sure to tell them OCFoodieGirl sent you!

Posted by OCFoodieGirl at 7:33 PM No comments: 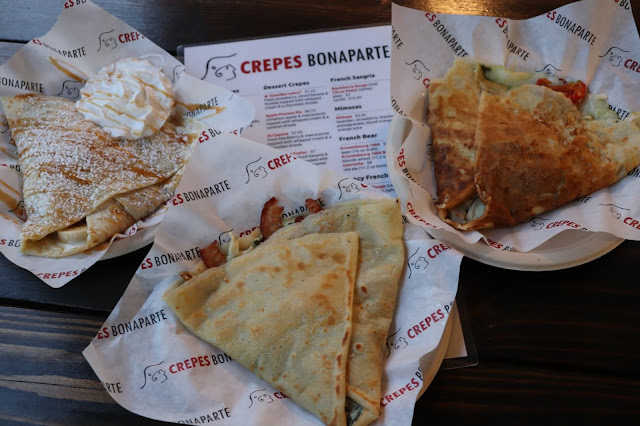 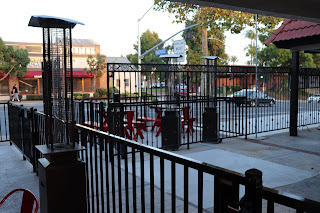 Having 10+ years of experience bringing crepes to the French loving public in the OC and LA via their popular food trucks,  Christian and Danielle Murcia, the owners of Crepes Bonaparte finally made the jump to a brick and mortar shop. The shop is an order-at-the-counter style restaurant with lots of comfy seating on the patio as well as ample inside seating at a counter that runs the perimeter of the space. 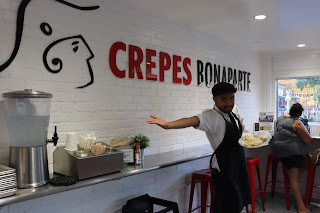 The staff couldn't be friendlier and are dressed in adorable french outfits and hats that mimic the waiters you see in Paris.  The cashier even greeted me in French which allowed me to use what little of my high school French I've retained. 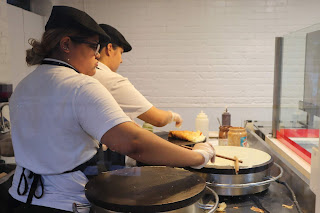 It's quiet a fun environment with a clear view of the crepe making station which allows you to watch the crepemakers cooking your crepes fresh on the authentic crepe griddle. You'll also see them slicing up your ingredients as they prep your crepes so there's no doubt at all that everything here is made fresh to order - very impressive!

As for the taste, well I've had crepes on the streets of Paris and I have to say Crepes Bonaparte may have been even better! ;)  I know most people think of dessert when they think of crepes but Crepes Bonaparte has four different savory crepes. They also serve their breakfast crepes ALL day so there's quite a few options here in terms of non-dessert crepes.

One of my favorite crepes was actually the SINFUL "No Joke Artichoke" with added bacon (trust me on this) - seasoned chicken with artichoke hearts, cheesy creamy spinach and some crunchy walnuts for added texture. You can't go wrong with this one!  I also tried the Caprese crepe which definitely hit the caprese mark with a delicious blend of tomatoes, pesto and garlic - YUM!

Of course, I was most anticipating the dessert crepes. They have quite a variety of dessert options including a monthly special crepe! They are most known for their HazelberryAna so of course I had to try it! It features fresh strawberries, sliced bananas and nutella, topped with whip cream and chocolate. - basically all your favorite things in one crepe. It didn't disappoint!

I also tried the Bananas Foster as I'm a lover of all desserts bananas. Their version came stuffed with yummy mascarpone cheese, sliced bananas and cinnamon sugar then topped with whip cream and caramel. I'm not gonna lie - it  is a bit of a messy crepe as it all ends up as one big pile of bananas caramel and whip creme but boy is it a tasty mess! ;)

To go with your crepes, they also offer mimosas in many different flavors as well as French beer, wine and sangria. 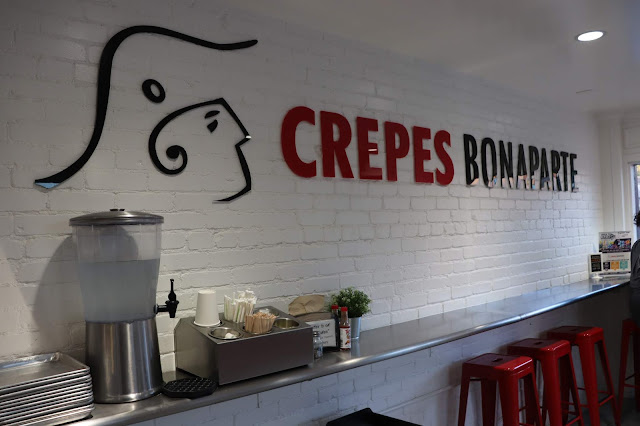 Crepes Bonaparte is located 115 S Harbor Blvd, Suite A, in Fullerton. They are right across from the large parking structure on Santa Fe. There are also some spots directly behind the restaurant although many of them are reserved for the adjacent business during the day hours so be sure to check the signage.

For more info and to see the full menu visit their website: https://www.crepesbonaparte.com/

Posted by OCFoodieGirl at 9:11 PM No comments: