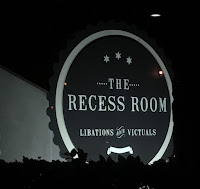 I love the backstory of how the "Recess Room" came to be - apparently, five Fountain Valley childhood friends came up with the concept of running a restaurant together while in grammar school and now as adults are making their dream come alive. Hence, the name 'recess room' which lends itself quite nicely to the overall playful feel of the restaurant.
Although I had very high hopes, I admittedly didn't come away floored but I also didn't come away entirely disappointed either.  Truthfully, I think "Recess Room" has a lot of potential but definitely still has some kinks to work out. Hopefully in the future they'll do just that and this place will be a true destination for OC foodies.
The first kink I ran into was making the reservation. I had emailed them through their website - there's an online form to put in your information, desired time, etc. that you submit online - which I had done. I even received an email saying they got my request and someone would be in touch. Nobody was ever in touch. I called them the morning of to check on the status of my request and a really nice lady told me she didn't remember seeing the reservation email. A tad bit annoying but regardless, they were able to get me in at my desired time of 7:15 on a Friday night so I figured no harm, no foul. I highly suggest you not risk it with the online system though and just pick up a phone to call if you want to make sure to grab a res here. I wouldn't go without one though as they were turning away walk-ins with an hour long wait on the night we were there.
Upon first entrance, you'll definitely notice that it has a hip fun vibe to it with a modern industrial-ish décor with lots of reclaimed wood finishes which exude a cozy warmth - perfect for this cold night we were there. The restaurant also has lots of fun artwork and playful décor throughout. All in all a nice ambiance. 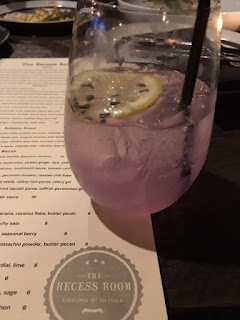 Apparently, Recess Room does not have a full bar yet - although word on the street is the liquor license has been approved and should be up and running soon! They do have beer/wine and what they call mocktails - which are non-alcoholic but they can add vodka or whiskey to them I was informed. I ordered one of these called "A Periwinkle in Time" which was a mix of lavender lemonade and coconut water.  It was super tasty and not overly sweet as some lavender cocktails tend to be...I would definitely order this again on a future visit. They seemed to have a pretty good selection of beer and wine as well with several offered by the glass.
At first glance the menu is almost overwhelming with a huge selection of dishes broken out into 5 categories - greens, starters, between bread, mains and  sweets (a.k.a. dessert). We asked our waiter for guidance on the menu and he was very helpful in giving us an idea of the size of the dishes, how many we should order and also pointed out a few of this favorites. The menu definitely hits many of the current food trends including brussel sprouts, avocado toast,  foie gras, bone marrow macaroni, wagyu tartare, and even an elote - which seems to be popping up on every menu of late. Wanting to compare apples to apples we of course ordered a few of these including the bone marrow macaroni & cheese, the elote and the foie gras. We also ordered a few of the more unique sounding dishes including the mussels, the crab pasta and the steak. 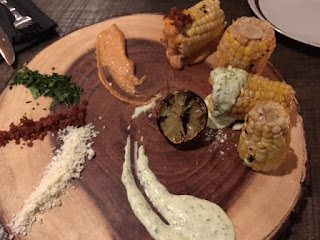 Our first dish to arrive was the "DIY elote" - which came with 4 half cobs (hence, the DIY part) and smears of two aiolis accompanied by lines of cilantro, bacon & cotija cheese.  This was all served on a lovely wooden platter that was the size of a butcher block cutting board. Not a good choice for our tiny table for two, especially when the other food started to arrive which it all did at once. We literally had to put our drinks and used plates on the window ledge to make room for it all. As for the corn it was nice idea to be able to DIY and prepare it yourself but a tad cumbersome to have it on the cob. Our waiter saw us struggling and brought us a steak knife and suggested we cut it off the cob and mix it with the sauces and bacon on the platter. We eventually ended up doing this and while it was not very pretty it was definitely easier to eat, with the same yummy ending taste result. I really did like the flavors of this dish as the corn was cooked perfectly and the aioli's, in particulate the lime zest aioli was divine. Even so,I don't think I would order this dish again as it was a lot of work and very messy to coat the cob then dip it in the bacon, take a bite then do it all over again for another bite. I'd be more inclined to order it again if it came to the table previously mixed together.
The timing of the food was definitely off as I mentioned, almost everything (except the elote) came out at once. I was under the impression, the 'starters' would come out first then the 'mains' but they all came at the same time which made it a tad difficult as the two person tables are quite small. Not to mention we worried about some of the dishes getting cold like the steak while we ate the starter dishes. 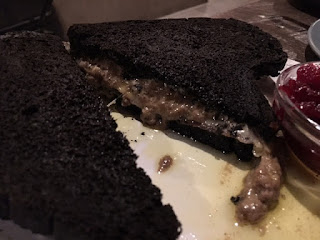 One of the first dishes I tried was the foie gras monsieur which is essentially their version of a croque monsieur -  listed as foie gras on squid ink toast with prosciutto, zucchini squash, etorki & idiazabal cheese. It also comes with a cup of jam which they recommend you dip it into. I took one bite and knew something was wrong. I am a card carrying foie gras fanatic who orders it anytime I see it on the menu and this was most definitely foie gras gone bad. We called over what we thought was a waiter but turned out to be one of the partners/owners who at first told us he could comp us a dessert, but couldn't take it off the bill as it was already made. However, he came back to the table a few minutes later and told us he had tried a bite of the uneaten other half and that yes, something was wrong and he would take it off our bill. I was still a little bummed as the combination sounded interesting but I wasn't daring enough to try a second order - not knowing exactly what was causing the foie gras to have such an 'off' taste. I did appreciate him trying it himself and taking it off our bill. 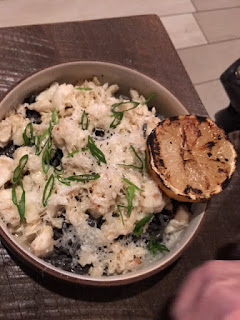 The next dish we tried was the jumbo crab pasta which proved to be one of our favorites of the evening. It came atop squid ink noodles and was dressed with a sinfully delicious beurre blanc cheese and chili sauce. It was just the right amount of buttery goodness and heat to go with the large chunks of fresh crab. I also liked that they served it with a large half slice of grilled lemon which we squeezes at the table before eating - it added a real freshness to the dish. Smart move on their part to not add it in the kitchen and instead let it be the finishing touch before you taste it. Yum! 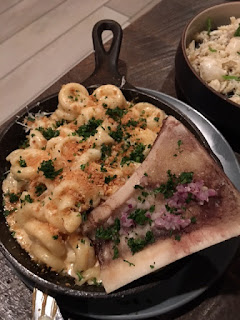 We also ordered the bone marrow mac and cheese (apparently it was a double pasta night for us!) and I have to admit that while the mac and cheese itself was tasty with a nice kick and a creamy cheese sauce, I was a bit disappointed with the presentation of this dish. From the description, I anticipated that the bone marrow would be somehow dispersed in the mac n cheese. Instead it was basically an adornment on the dish. We assumed this was another DIY dish so we scooped it out of the bone and tried to swish it around the mac n cheese. Unfortunately for us, it wasn't hot enough to really meld into the rest of the dish and ended up being sort of a few small blobs here and there in the dish. This may have been our fault as perhaps we should've eaten this dish first but there was no direction given when the dish was served. All in all, I wouldn't dissuade anyone from ordering it as it's quite tasty but not sure the bone marrow actually added anything to the mac n cheese since it's almost like two separate dishes served together. 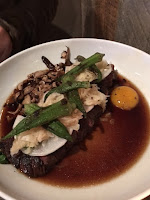 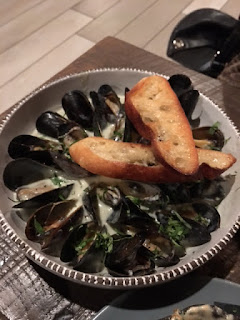 My friend & I both agreed that our two hands down favorite dishes were the steak and the mussels.  The mussels were served tom kha kai style in a bright lemongrass coconut sauce with hints of ginger and lime. I could've had just this dish for dinner and been extremely happy. The mussells were also cooked to perfection and cleaned well with not a sandy grit in sight. The steak was a hangar steak cooked to a perfectly pink medium rare (as we ordered) and served with some charred baby okra, jalapenos and sautéed mushrooms. Also hiding in the sauce was a raw egg yolk which threw us off at first. We had to ask the waiter how we were to eat it and he said to mix it into the sauce to add some creaminess. We did this and I have to say it was a divine addition and added a hint of richness to the sauce that went perfectly with the steak. I HIGHLY recommend both of these dishes. 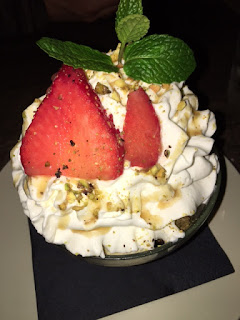 For dessert we tried the Hot Date Cake which was a moist yet dense date cake covered in a silky toffee caramel sauce with a huge mound of whip cream and pistachios. No complaints on this one as it delivered everything it promised and was pretty darn delicious. I also liked that it's something unique that I haven't seen too often at other places while still being very tasty. They are also known for their fluffer nutter which we saw go by our table many times as it's quite the popular menu item but we wanted something a little lighter to end our meal. Next time! ;)

All in all, I think Recess Room is worth a visit although I might hold off maybe a little longer til they work out a few more of the kinks, plus it will also give them time to get that alcohol license working and in place! They've only been open since October so haven't even hit the 6 month mark yet.  I enjoyed many of the dishes and even though the overall menu has a lot of somewhat typical trendy dishes, there were enough unique dishes that make it worth a visit if you're looking for something new to try. Ironically, the more unique dishes were the ones that we enjoyed the most and that stood out to us at the end of the meal.
Recess Room is located at 18380 Brookhurst Ave in Fountain Valley.
Hours: open for dinner only as of now, 5:30-10pm
Phone: 714/377-0398
website: http://therecessroom.com/