Tix are still available for the annual Taste of Laguna on
Wednesday, September 21st but hurry cuz
prices go up by $20 on 9/21! 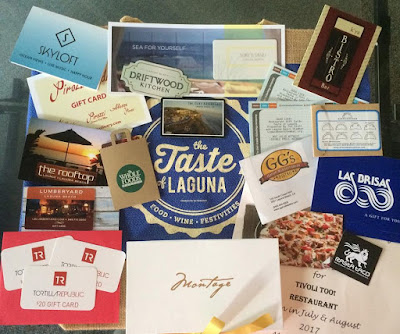 It's NO secret Laguna Beach is a hotbed of great dining with some of the best restaurants in Orange County so what better way to sample 35+ of them than at this fabulous event?! Just take a look at the list of wonderful restaurants participating: 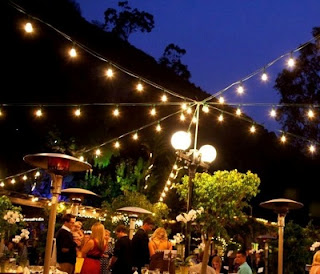 The event will take place at the beautiful Tivoli Too! in Laguna Beach and will feature local musicians, auctions, a photobooth and lots of fun under the twinkling lights in this evening under the stars.

Advance tickets are ONLY $65 and include all tastes! Tix can be purchased on the Chamber's website: LagunaBeachChamber.org, “events” tab; or contact the Chamber at (949) 494-1018.

A VIP package is also available for $85, which includes early entrance at 4:30PM, adjacent parking, and a VIP cocktail line.  Tickets on the day of the event and at the door will be $85 and $105 so buy your tickets NOW before the price goes up! Note: You must be 21 or over to attend, photo ID required. Tivoli Too! is located at 777 Laguna Canyon Road, Laguna Beach.

Posted by OCFoodieGirl at 6:12 AM No comments: 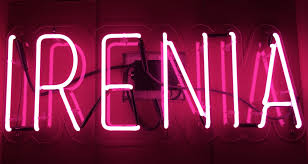 Stopped by the new Philipino restaurant Irenia last month and of course, had to bring along a Philipina friend to give me her opinion on the authenticity of the flavors. Admittedly, most of my previous experience with Philipino food was at the chicken adobo level. That, and the occasional lumpia that co-workers have brought into the office throughout the years. Both of which I really liked and helped to nudge me to want to try Irenia - which bills itself as 'soulful Philipino cooking'.

In case you don't know the backstory of Irenia, it started as a Pop-Up concept in early 2015 - several highly regarded dinners were held which led to earning a 9th spot on Eater LA’s 21 Hottest Restaurants in Orange County in summer of 2015. Eventually, in early 2016 Irenia, the permanent restaurant was born! 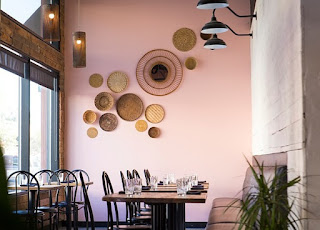 One of the first thing I noticed about Irenia is the space itself has really been brightened up from it's former Crosby & North Left days. I was fan of both of those restaurants and frequented them often. I was sad to see them both disappear but have to say I immeditally appreciated the bright updated warm feel of Irenia's decor. 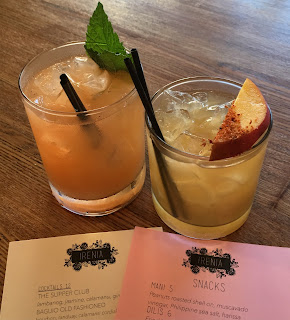 Our first surprise of the evening came with of all things the cocktails! We were presented with a really unique and well thought out menu of amazing sounding cocktails. Not sure what I was expecting but just didn't think a Philipino restaurant would have such modern unique cocktails. We wasted no time in ordering several and I have to say each one we tried was almost better than the last -- all very refreshing and well put together with just the right combination of flavors. My favorite ended up being the Supper Club and the Bottle Rocket but I don't think you can wrong with any of them here folks!

The menu here is small but pretty comprehensive - separating menu dishes into snacks (i.e. appetizers), small plates and entrees. Myself and my two friends opted to share and pretty much ordered almost everything on the menu. Be aware though that the menu does change as often as daily so it may be different when you visit but from my obsessive monitoring of the menu it appears some of the more popular dishes make constant appearances on the menu. ;)

We started with the infamous dilis - which I had never had before. Dilis are basically fried whole tiny anchovies that you dip into a vinegar spiced with chiles. I quickly learned that you want this vinegar to be ultra-spicey for optimum flavor - as my friend pointed out. They were delicious and while I know some people will be put off by the 'whole fish' notice you really should try one before you write 'em off. Close your eyes if you MUST folks cuz the taste will be worth it, and you most likely won't be able to eat just one!

From the 'small plates' section one of our absolute favorite dishes was the Ginataan Corn.  Simple- yes, but with incredibly developed flavor exploding with lime, chile and a distinct
earthy flavor most likely coming from the tiny mussels studded throughout. Somewhat reminiscent of the Mexican corn on the cob with the lime/chile taste but with a distinct flavor and creamy texture that was all it's own.  It was divine and we ate it down to the last kernel!


The second small plate we tried was the Kuliplor - which is a roasted cauliflower with a special bagoong mole sauce, mango and toasted sunflower seeds. This was good but actually one of my least favorite dishes. The tastes were very subtle and the cauliflower itself was over cooked and a tad mushy for my tastes. I did like the brightness of the mango and the crunch of the sunflower seeds - both nice additions to an otherwise dull dish.


Our final small plate was the Pancit - which truthfully was more entree size as it was quite large and a bit on the heavy side to be considered a small plate. Regardless, we absolutely loved this dish! Canton noodles topped with luscious whole crispy Santa Barbara prawns
topped with a luscious prawn head sauce and speckled with crunchy blue lake green beans & slightly cooked carrots. Drizzled lightly on top almost like a Philipino version of Parmesan cheese was a savory shrimp powder. We shared this dish but it could easily be an entree for someone but just be warned it is a tad rich.

After the two small plates, the entrees made their way to our table. First up was the Pork Belly adobo. Now - this is where my friend & I diverged a tad. ;)


I thought this dish was fantastic - perfectly cooked with excellent flavor. However, my Philipina friend made it clear that this was no adobo. She said it was highly lacking in the vinegar taste that is usually prevalent in adobo flavor.  To her this was more of a pork belly teriyaki so be warned Philipino friends seeking authentic adobo tastes that this may not be the traditional taste you've had before.  Regardless, the dish was very tasty - cooked tender with a crispy char and an asian-like sauce. Even my Philipina friend agreed it was still tasty and worth ordering. .


The last entree to arrive at our table was the Chicken Inasal. At this point we were quite full as we didn't anticipate well how large some of the small plates would be and it was quite a substantial amount of food. However, this looked (and smelled) so yummy when it arrived that we couldn't go without at least trying it. If I'd known how delicious this was I would've
eaten less of the prior dishes! Pan roasted chicken thighs with 'chicken joy' gravy  served over summer squash and gailan greens. I have no idea what is in the chicken joy gravy (family secret apparently!) but it's very true to it's name and just lends a warm comfort food taste to this dish that isn't apparently in anything else we were served. This was my favorite dish here and I highly recommend that you order it if it's on the menu the night you are there.

As full we were, there was no way we weren't going to order dessert here. Irenia has snagged one of the top pastry Chefs in the area - the highly revered Ashley Guzman. Knowing this, we decided to share the Turanodo. Holy smokes... basically dessert lumpias, these were insane! I could eat a plate of these for dinner and be happy. ;)  Fried crispy and stuffed with banana semi-freddo and coconut jam (*sigh*), and topped with a crumbled peanut brittle floating in a sea of champuraddo chocolate-corn sauce. Crazy delicious and the PERFECT way to end our Philipino food adventure at Irenia.

All in all our experience at Irenia did not disappoint and we all agreed we would definitely come back.  The service also deserves a mention as it was top notch - attentive, prompt and more than patient with us as we had a lot of questions with it being our first time here and me only being somewhat familiar with Philipino food. Our waitress was extremely well versed on not just the ingredients of the menu items but the actual flavors of each dish. She really helped steer us in the right direction for a fabulous meal.

Irenia is located at 400 N. Broadway in Santa Ana - it is a tad bit hard to find as the signage is small. For reference, it is one block north of the Santara Arts Building. Two storefronts up from the Starbucks on the corner. Reservations are HIGHLY recommended (especially for Friday or Saturday night) and can be made by calling 657/245-3466.  Dinner is available Tuesday - Saturday. Lunch is also served Tuesday - Saturday but only from 11-2pm.
Posted by OCFoodieGirl at 1:22 PM No comments: