Friday, June 7th is National Donut Day and you know what that means? Donut deals galore - some free, some free with purchase and some just offering unique donuts for one day only! Whichever you chose there's no better excuse (as if you need one?!) to get your donut on this Friday!

On to the donut deals... 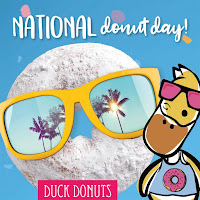 Duck Donuts - a relative newcomer to the area, having opened locations in HB and Irvine in the past year, is offering a FREE classic donut to everyone as part of their Sweet Summer Beach Bash to celebrate National Donut Day!  Pop by one of their locations anytime on Friday for a FREE one! Classic flavors include bare, cinnamon sugar and powdered sugar. Duck donuts specializes in hot made-to-order cake donuts. No purchase or coupon necessary. Limit one donut per guest.
Irvine: 2222 Michelson Drive, #200  and HB: 18591 Main Street. 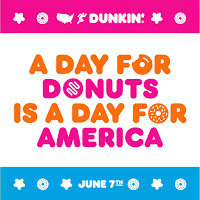 Dunkin - having made a return to So Cal in recent years, there's a Dunkin in almost every town in OC. To  celebrate National Donut Day, Dunkin is offering a FREE donut of YOUR choice with any beverage purchase. 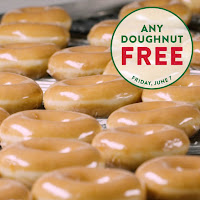 Krispy Kreme is going one step further for National Donut Day by not only giving everyone a FREE donut of their choice (no purchase required) but by also attempting to give away a million donuts and if they reach it, they are vowing to do another FREE donut day later this month!

The yummy GLEE donuts in Anaheim and Fountain Valley is offering a FREE donut to the first 50 peeps! 1 per customer while supplies last. Both location open at 5:30 a.m.! 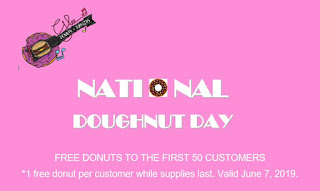 One more.. if you happen to be Walmart, the word is they are giving out FREE glazed doughnuts in their bakery sections on Friday too. Free is free right? ;)

The above are just the deals that were announced! I would check with our favorite donut shop to see if they're offering a deal - you never know! Enjoy your donuts!

Posted by OCFoodieGirl at 8:21 PM