So I admittedly don't get down to Dana Point too often but I heard that there has been a bit of a renaissance going on in the city for the past few years, so I was eager to head down to try the highly touted Coastal Kitchen. 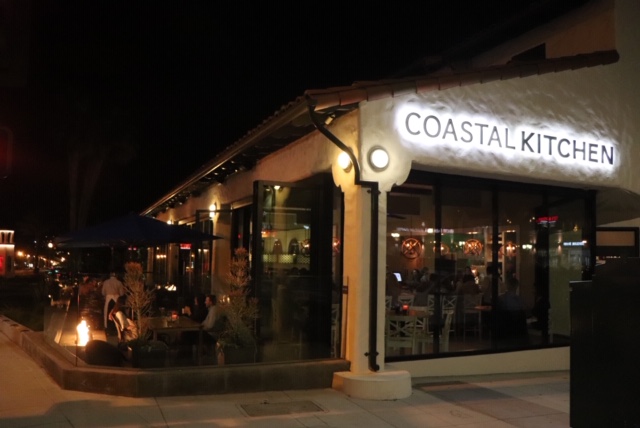 Coastal Kitchen opened up in mid-2016 in a historic building that was actually the first commercial building in Dana Point. It's' been lovingly transformed into a beautiful restaurant with a coastal ambiance taking full advantage of the Southern California lifestyle with large open glass doors and cozy fire pits all along the north entrance. 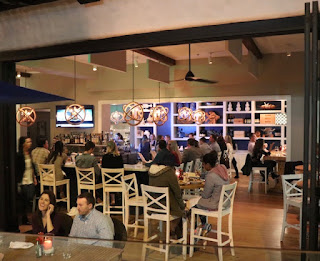 The open glass doors lead to a chic bar area which was quite popular the night we were there. I imagine the fire pits and bar area draw quite a crowd on a nice evening.

This casual coast ambiance is also evident in the interior with a comfy nautical decor with lots of  blues and crisp whites which makes for a very inviting space. This atmosphere is also reflected in the menu at Coastal Kitchen. The varied menu has something for everyone from sandwiches, salads to fresh sustainable seafood and hearty steaks. It made for a difficult decision when it came time for order!
We settled on the Chef's tacos as a starter - every night the Chef features a local protein to make a small starter plate of 3 tacos. This could easily be a course for someone too but we opted to share them as an appetizer.  The tacos were some of the most delicious salmon tacos I think I've ever tried - fresh and meaty with a lovely mango salsa on top to brighten it up. Needless to say, we devoured them! 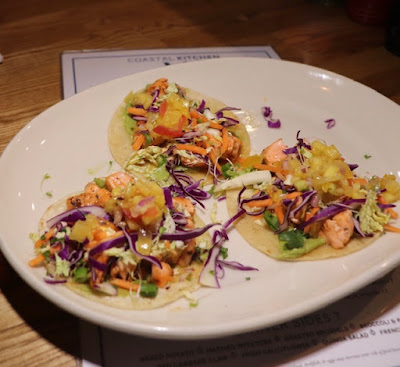 Coastal Kitchen has an open kitchen with windows separating the chefs from the dining room. Luckily, we were seated right next to the window so it was quite a treat to watch the Chefs cooking up our meals.  The first entrée we sampled was the Big Island Ribeye steak - 14 ounces of perfectly cooked juicy marbled ribeye. Prep of this gorgeous cut includes 72 hours bathing in a teriyaki style marinade, which lends a really nice flavor to the steak. 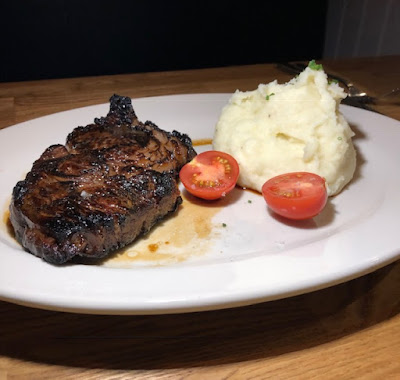 When the scallops arrived they were so stunning we almost felt bad cutting into them - seared perfectly with a nice char and topped with a pineapple avocado mango salsa. There were three large U-10 scallops which were large enough to make an entire meal. 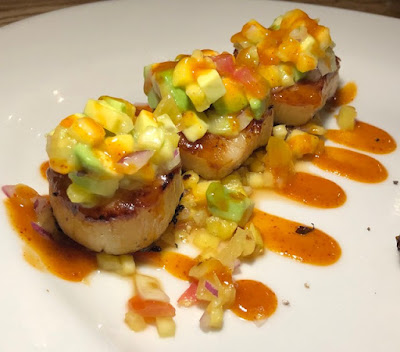 One thing I really found appealing is that even though the entrees are listed with a side, Coastal Kitchen lets you change it to any of the sides listed on their menu. It was great as we were sharing entrees and mashed potatoes are a whole lot easier to share than a baked potato. It also afforded us a chance to substitute their delicious crispy Brussels sprouts! 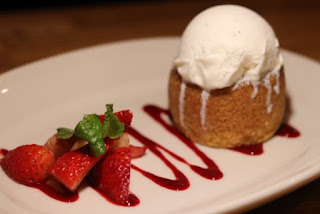 We had such a hard time deciding on dessert that we ended up with two - the infamous S'mores Pie that Coastal Kitchen is known for, and the sinful butter cake w berries.

Both were as delicious as they sound! We especially loved the playfulness of the S'mores Pie, with a graham cracker crust filled with silky chocolate mousse and crowned with pillowy charred marshmallow topping.  This would be the perfect thing to enjoy out by the fire pits on a chilly night! 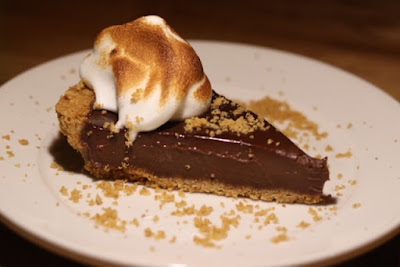 I was very impressed with Coastal Kitchen. It's a great place for any occasion with a varied menu and several distinct areas that are right for any occasion.  The food is fabulous, the service was attentive and helpful (kudos to our awesome waiter Ryan!) and I highly recommend you check it out!

Be sure to tell them OCFoodieGirl sent you! ;)

Posted by OCFoodieGirl at 3:22 PM