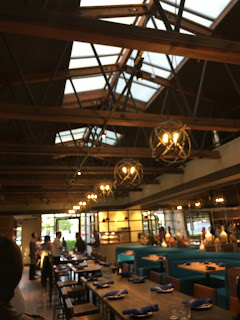 There must be something in the water in South Orange County cuz all of a sudden it seems like some great dining options are finally opening up down south! The newest addition being the set to open this weekend, Hendrix  -- brought to you by the owners/operators of Driftwood Kitchen & The Deck in Laguna Beach.


First off, the restaurant itself is gorgeous - a mix of warm woods and modern metals with pops of color throughout.

As you walk through the space it almost feels like separate little intimate areas - they have a gorgeous lounge to the side with cozy circular seating as well as a private room for small groups.

The main dining room itself has a really nice ambiance and wide roomy seating - no elbow to elbow dining with strangers here! 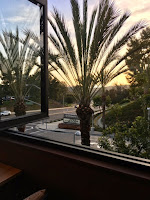 There are also these gorgeous wall size windows that open up to reveal a distant view of the ocean from the southernmost seats.

It's quite amazing what they've done with the expansive space as it used to be a Fred's Mexican Kitchen - which no offense to Fred's but it's definitely an upgrade! 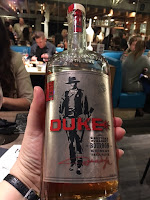 We started off the evening with cocktails - which almost deserve their own review here! You can really tell a lot of thought went into every detail of the drinks here. From the name of the restaurant - which actually stems from the favored gin here (Hendricks) to the use of the namesake whiskey (The Duke) of one of the owner's grandfathers, John Wayne - yes, THAT John Wayne.

Every drink we tried was fabulous but the two standouts IMHO were:
1) The Lighthouse - a mix of reyka vodka, white cranberry juice, lime sour & fresh cantaloupe juice - this was light and fruity but not overly sweet. A great cocktail for a warm day or to go with a slightly heavy meal. Loved it!

2) The NetZero -  gin mixed with carrot juice, turmeric, lemon sour & parsley. Yes, I know my first thought was also of something you'd find in a juice bar but this is definitely cocktail fare folks plus you can sip it guilt-free knowing you're getting some good stuff in you at the same time! ;)

Hendrix also has an expansive wine list and wine by the glass list, as well as a draft beers by the bottle and on tap. At some point the plan is to also have a small wine store in house to allow diners to pick out a bottle for dinner at near retail price - quite a nice touch for the wine drinkers!

The food itself at Hendrix is billed as "New American" which assimilates flavors from the melting pot of traditional American cooking techniques. Dishes include popular cuts of ﬁsh, steaks and chops as well as some amazing rotisserie items with interesting and ﬂavorful accompaniments and appetizers reﬂecting seasonal availability and quality.

Admittedly, the real stars of the show are the rotisserie (or Roti, as the menu deems them) items. You can order them individually or as a mixed plate to sample all the different offerings. Some of the standout dishes from Hendrix’s rotisserie include spit-roasted Porchetta, Rosemary-Lemon Chicken, and Colorado Leg of Lamb. All of which will be available for takeaway and in-house dining as entrees or shareable platters. 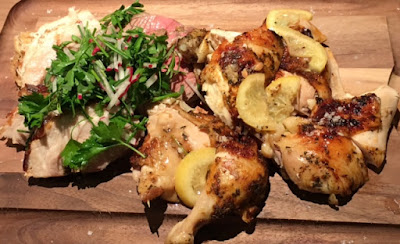 Everything we tried was delicious and well prepared but there were a few dishes in addition to the Roti, that blew my fellow diners & I away and should be on your MUST try list when you visit Hendrix. These included the following:

All in all I was VERY impressed with Hendrix and am confident they are going to do quite well in their new location, next to a luxury movie theater in an area that is somewhat lacking with comfortable upscale yet still affordable dining. With the loss of Savannah Chophouse in the same center this area has been crying out for something a little nicer and more creative than what's currently in the area. 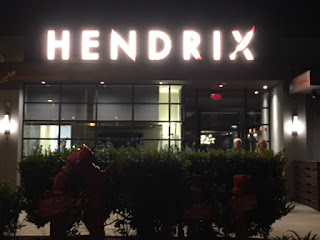 Note: Hendrix is slated to open on Saturday, April 8th but that is tentative.
I'd call to confirm before you head over!

Word is eventually they'll be doing lunch as well as brunch on Sunday.
Posted by OCFoodieGirl at 8:16 PM