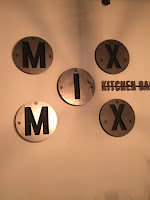 Visited the new Mix Mix Kitchen in Santa Ana and although I didn't quite find the Filipino flavors I thought would be there, the food was still a complete knockout!

Being a big fan of Leatherby's I was beyond excited to try out Chef Ross Pangilinan's new venture. I went on a Thursday night w three friends, the week after the grand opening (which I unfortunately missed) and was surprised to see the dining room was more than half empty. We had a reservation but opted to sit at a high top in the bar area as it appeared to be a little more lively. 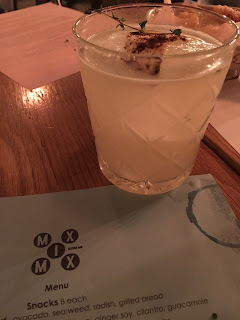 I started my meal with the "Take Me Back" cocktail which was a refreshing and tasty mix of vodka, lavender bitters, Asian pear shrub, lemon-lime and was garnished with thyme and a pear chip. I didn't get a chance to try any of the other drinks but if this is any indication, it's pretty clear some serious thought went into the yummy drinks here.

Upon initially perusing the food menu we were pleasantly surprised to see that based on the descriptions alone we pretty much wanted to order the entire menu. Every item sounded more amazing than the previous one, and being that it's mostly a shared style menu we ordered a variety of items to share and try.

While waiting for our drinks/food to arrive, they brought over a plate of crispy fried pork skins. Holy moly, these were divine!  I think they refilled our dish three times before our food came. Regrettably, I didn't get a pic of these as at the time I thought 'oh, pork skins' not 'OH, PORK SKINS!" Next time promise to snatch a photo of these tasty morsels... 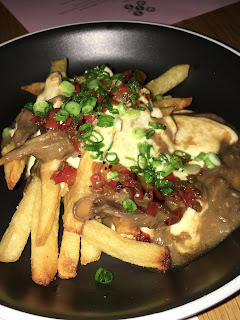 The first dish to come out of the kitchen was the cheese steak fries. These were billed as being topped with a homemade cheese whiz sauce (reason enough to order them) and oxtail. How can you go wrong with that combination? No surprise that they were absolutely fabulous. Perfectly crispy fries served hot outta the fryer topped with a lusciously smooth cheese sauce and speckled with tender strips of oxtail and fresh scallions. I could've eaten this dish alone as my entree and been a happy girl.

Just a note that the portion was also pretty large for being billed as a 'snack' on the menu. We easily shared this between the four of us with even a few fry crumbs left - no cheese or oxtail mind you. ;) 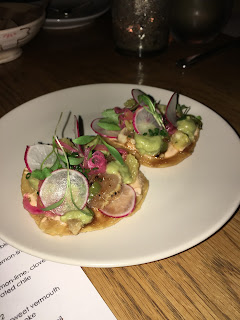 We also ordered the albacore tostadas. These were admittedly small but in fairness they were from the 'snack menu' and priced at a more than reasonable $8 for two.

We ordered one per person which was perfect. We were actually quite happy we didn't try to share one order amongst the four of us as after we dug into them we were all oohing and ahhing at the great flavor. They were the perfect combination of orange peppery fresh albacore topped with cilantro, light ginger and a scantly spiced sauce - all on a palate pleasing lightly fried crunchy tostada. Yum! 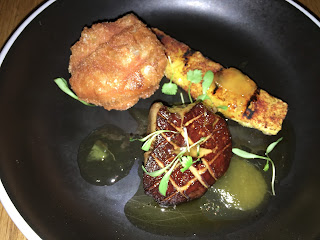 As much as we liked the first two previous dishes, everyone's hand down favorite dish was the seared foie gras with the crispy sweet bunuelo and the seared pineapple skewer. This was sooo good that we ended up ordering six orders for the four of us. Yes... it was THAT good. 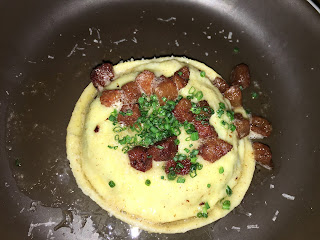 I couldn't resist odering the soft egg raviolo as I love the combination of pasta, brown butter with a creamy egg yolk. It was delicious with the soft egg inside oozing out perfectly over the pasta and mixing with the crispy guanciale, all coated in the perfectly cooked brown butter sauce. It was so good and even though I devoured the whole thing by myself, it could easily be shared with a friend as it is a bit of a rich dish - albeit delicious. 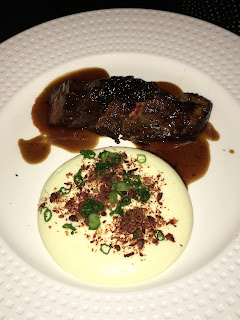 The hanger steak with potato espuma and shallot marmalade was our final dish of the evening. Cooked perfectly medium rare with a lovely sear it was quite tasty, if perhaps a smidge on the salty side.

The espuma took a minute to get used as it had a smooth texture reminiscent of baby food, beyond a puree. Eventually, the texture of the scallions and the shallot marmalade helped to acclimate my palate to it but I do have to admit of all the dishes, this was probably my least favorite. My dining partners agreed.

We ended the night with the tropical verrine...a panacotta with a mix of lychee, passion fruit,coconut and macadamia nuts. This was the perfect little ending to a somewhat heavy meal - admittedly by choice. 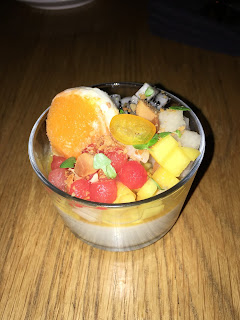 I have to say I was very impressed with Mix Mix and the Chef himself. Chef Ryan came out and greeted us warmly, asking how we liked the food. I recognized him right away and had to express how happy we were with the meal. You could see how proud he was to hear this, and truthfully his pride is evident in the care shown on each of the dishes. I am hoping for great things from Mix Mix and look forward to the day when I can't get a seat even in the bar. ;)

Mix Mix Kitchen is located at 300 N. Main Street in downtown Santa Ana.
They're open Tuesday - Saturday for dinner only and Sundays for brunch only.
For a reservation, call: (714) 836-5158
Website: http://www.mixmixkitchenbar.com/

Posted by OCFoodieGirl at 10:30 PM